I don’t think I could have timed this blog post more perfectly if I tried. With the weather set to reach the mid 20s this weekend I’m sure lots of people will be soaking up the sun and warmth in the park or beer gardens. You know what the best addition to that whole situation would be…a good old cocktail in a can and ones that won’t break the bank. So fear not, you won’t be standing in the supermarket aisle wondering what cocktail to go for because I have done the hard job of research for you.

We’ve got a first here on adoseofapril today as this is my first blogger collaboration blog post. That’s right you’re getting two excellent blog posts full of useful information when it comes to cocktails in a can. The blogger I’m collaborating with is the lovely Ellie from HelloEllieLouise. Be sure to check her fantastic blog out as well as her Instagram.

Right let’s get into the information you’ve come here for. The whole idea for this blog post came around when I randomly ended up getting two cocktails in a can from Aldi a few weeks ago. I was amazed that they were selling for 85p so kind of did a mini review of one on my Instagram and Ellie messaged to say she’d love to read a blog post on that. This obviously sparked a very in depth conversation about cocktails and the idea of this  blog post was born.

For my blog post I’ve decided to focus on two different cocktails and comparing the same two that I’ve purchased from three different shops. It’s kind of my way of researching for all you lovely and doing the hard work so you don’t have to. The cocktails of choice were a classic mojito which by far is my favourite cocktail and a simple rum & coke. I don’t think you can go wrong with either of these but I thought choosing quite different cocktails would ensure there would be something to suit most peoples tastes.

Now I’ve probably taken this too seriously but hey when it comes to tasting cocktails you can’t not…I’ve got to give you the best and more useful information in the end right or what really is the point?!

All cocktails purchased were under £2 which I think it a pretty fair and common price to pay for a cocktail in a can.

First up we have the branded leader, Captain Morgan’s Original Spiced Rum & Cola which comes in at £2 which makes this the most expensive drink so we’re starting off on a spendy one. For me you can’t really go wrong with this drink, you know what you’re getting and therefore I feel like the price is justified. It tastes like you expect it to and there’s no frills about it. I like how the can is fatter size compared to most because it feels like you’re getting more and it’s more substantial. 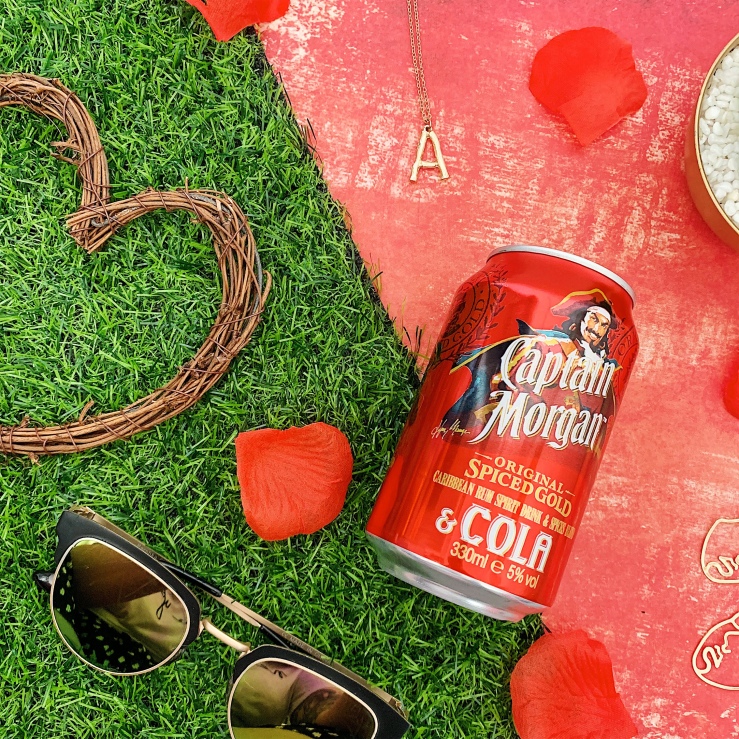 Second is Tesco’s answer to the above which is their Rum & Cola with vanilla and spice which comes in at £1.25. You’re paying less for this and it kind of tells in the taste, for me the kick of alcohol just wasn’t there for me and I think that’s down to the fact that the vanilla was just overpowering. If you’re not a massive fan of the actual taste of alcohol but still fancy a bevy then this might be one for you. It’s a nice sweet taste but just doesn’t hit the spot for me. I’d rather spend the extra 75p to actual be able to taste the rum. 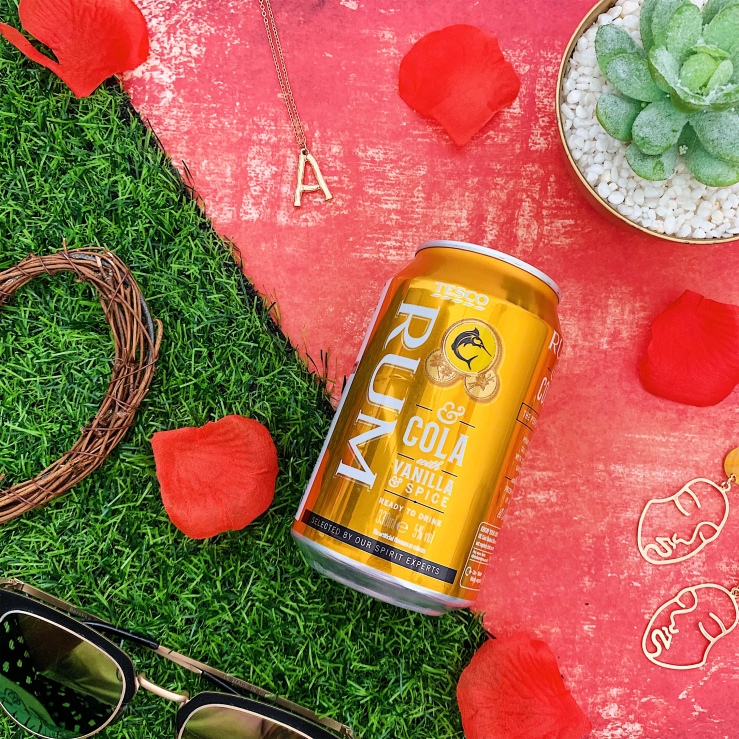 Lastly for rum and cola is the one that started this whole thing…Aldi’s version which goes by the name of Old Hopkins Spiced Gold Rum & Cola which comes in at 85p. Now if you follow me on Twitter you’ll already know my thoughts on this but let’s expand on that. For me this was a disappoint because I’m a massive Aldi lover and advocate…love me a bargain. It was far too sweet for my liking which you just don’t want when you’re wanting to drink a rum and cola. It literally tasted like an even sweeter version of vanilla coke before the sugar tax came in. I actually couldn’t finish it due to that fact alone. So yeah there was no taste or trace of the rum at all. I don’t think if I was drinking it blind that I would have been able to tell that it had alcohol in it.

Now onto my all time favourite cocktail…the mojito! We’re starting off with my favourite which is another Tesco own brand and that I’ve been loving for years…so much so that I’ve purchased the 1.5L pouch of it many times. This cocktail will set you back a whole £1 and it’s worth every bloody penny. I actually haven’t tasted a better mojito in any bar that’s better than this one. They’ve just managed to get the right ratio of everything…the lime, the mint, the rum. It’s the perfect mix of sweetness and pinch of sour. It’s so refreshing to have on a hot sunny day too. The only issue is that they are so addictive that you don’t realise what effect they are having until it’s too late and you’re a bit too tipsy… 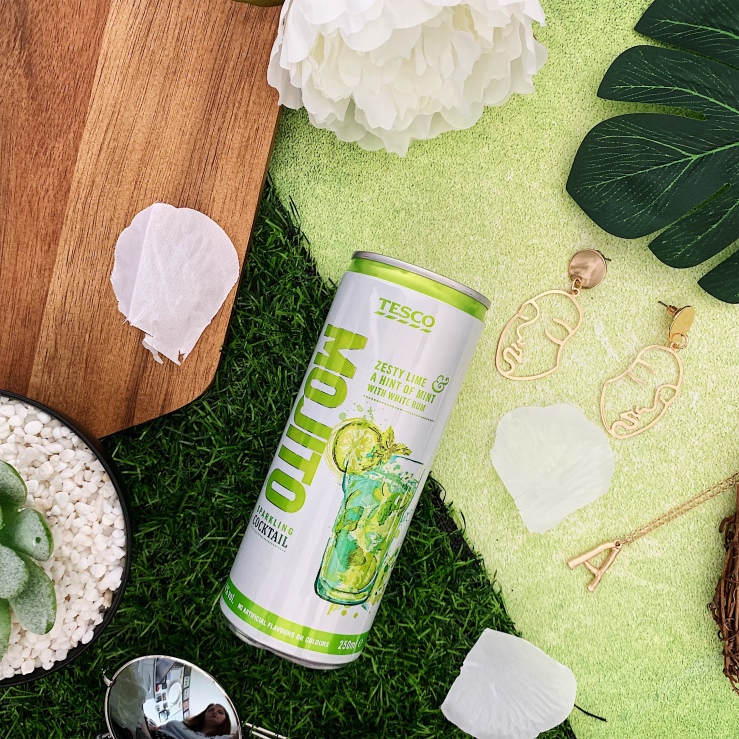 Next up we have the brand leader and another pricey one which is the Bacardí Mojito Rum that comes in at £1.50 so not as expensive as the Captain Morgans but up there with stretching your summer drinking budget. Well the first thing I need to say about this is that it’s strong! Wow, the taste of rum really took me back when I first sipped this, so much so that it caused me to cough a little. So if you’re in the market for a much stronger tasting mojito than this is definitely your go to. I couldn’t really taste much else except a slight hint of mint which I think was triggered by actually smelling it. 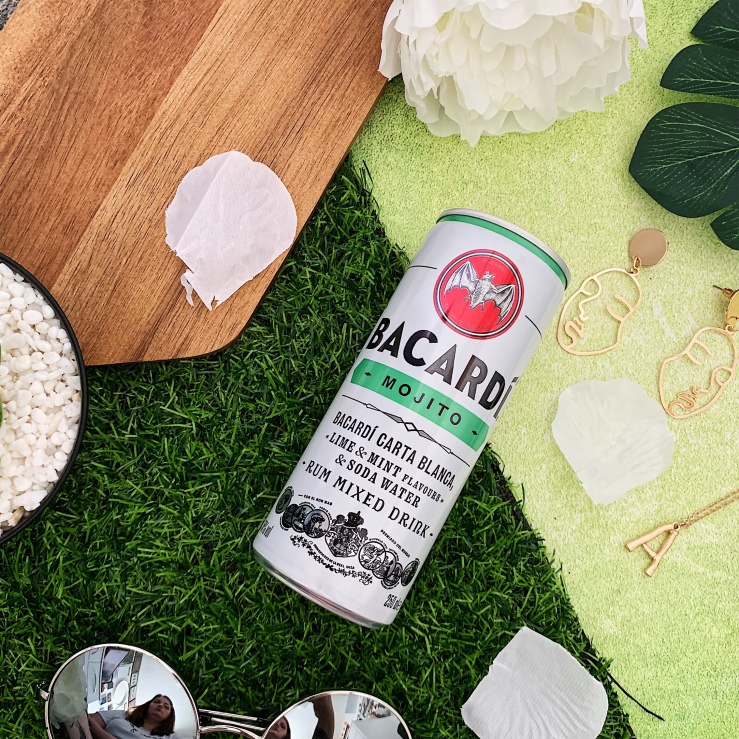 Lastly we have Aldi’s answer to a mojito and can I just mention how cool the can looks, I mean for 85p they really have put some time in the design of this and would definitely fit in a supermarket like Waitrose or M&S. This one didn’t disappoint me like the rum and cola and I can’t tell you how happy this makes me. I was actually a little surprised to see Aldi doing their own version of a mojito as it’s not as common as some other ones especially in a can. This could be in the running for my favourite mojito and might be knocking the Tesco one off the top spot. You’ve got the right mix of everything in this again but I would say that the taste of rum is less apparent in this but for 85p can you really complain?! 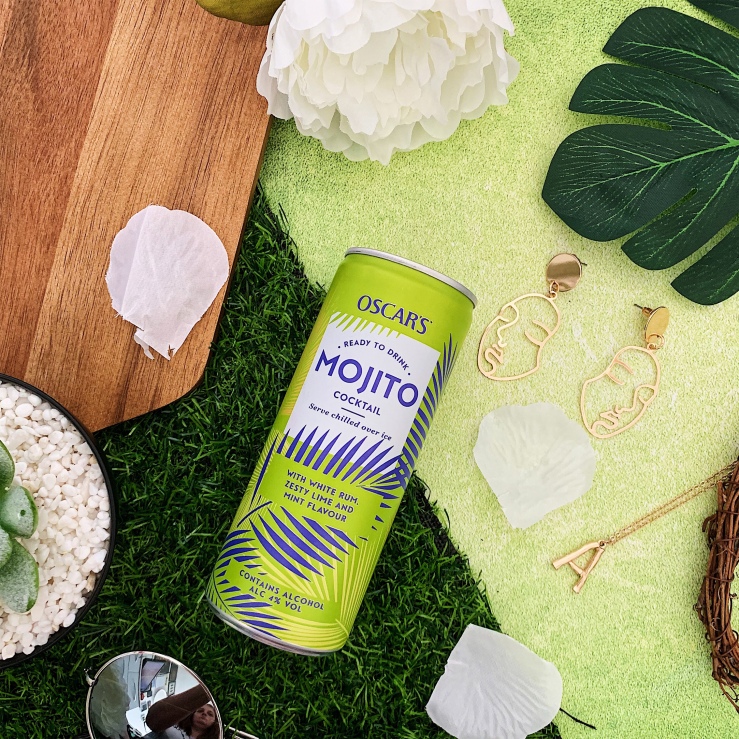 If you’re going to give any of these cocktails a go I’d definitely recommend the Tesco mojito and the Captain Morgan’s Rum and Cola. So if you’ve got a spare £3 laying around this weekend, head to your local Tesco!

I hope you enjoyed this blog post, it’s something a little bit different but I’ve really enjoyed writing it and of course trying SIX different cocktails. I guess the only question left to ask is…what’s your favourite cocktail?

Be sure to head over to Ellie’s blog to give her Cocktails in a Can blog post and get the low down on some different drinks.

Thanks so much for reading my latest blog post, be sure to come back next week for a brand new post.

Check me out on my other social platforms…

23, Suffolk. Mid Size Fashion and Lifestyle blogger with an addiction to coffee and love for music and cats. View all posts by adoseofapril

12 thoughts on “Cocktails in a can – collaboration with helloellielouise_blog”

This site uses Akismet to reduce spam. Learn how your comment data is processed.

Hello and welcome to adoseofapril! Here you’ll find inspiration for everyday fashion for the everyday girl and lifestyle tips and tricks whilst also sharing doses of my life. Thank you for stopping by and happy reading…